Genealogy has become a hobby for me over the last 10 years. For me, it's like a puzzle, I love fitting the pieces together. But over the years, I've researched a lot that does not pertain to our family lines. Some for extended family, some for close friends, and some because I was trying to rule out lines to figure out where our line went exactly. I do not want these notes on my Heather's Genealogy Notes blog - because they are not our lines. But I do like to share all of my research, in case it benefits others. That is what this blog is for - research I have done that does not apply to our own family lines, but may be helpful for someone else.

1850 - Possible Census
WIlliam's Death certificate names his parents as David & Anna (Clawson) Dunkel, and tells us that his father was born in Germany and his mother was born in Altoona.

I can't be certain that Anna & Elizabeth are one and the same, and if they are, either the death certificate stating that David was born in Germany, or the Clawson record stating he was born in Pennsylvania, is incorrect.  But I think it is LIKELY that this is the correct record for David .  The other David in this area at this time is married to a Julia, and is not a likely match. 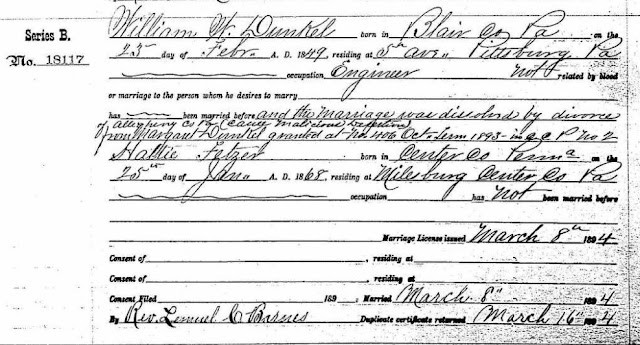 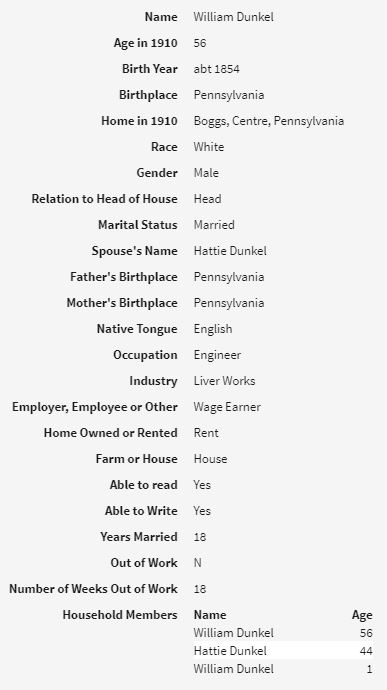 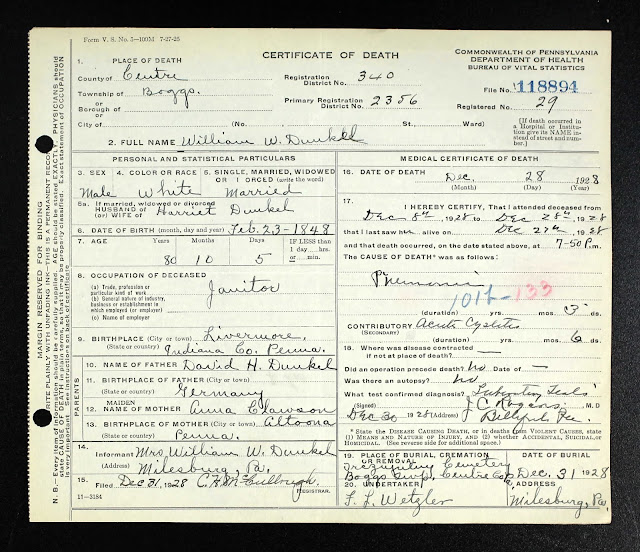 Posted by Heather Truckenmiller at 9:24 AM No comments: 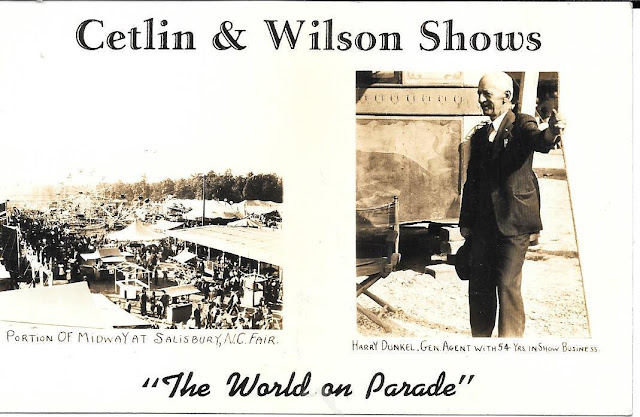 1875 - Harry William Dunkel is Born
There's a social Security record that says he was born in 1878
The death date is the same, so is this an error?  I'm not familiar enough with this index, but if a claim was made in 1945 - it would be very interesting to see who made that claim, if at all possible.

Certificate Number: 20899
His occupation is given as Steel worker -which seems out of character.  But in 1900 we see him married to Annie, working in the Opera House.

Annie is 5 years older than him and has a 9 year old child.  I do not believe the child is his, as he would have been too young.

Annie is a bit of a mystery - but since she is a Huffmire, according to her marriage license, and she is NOT in the 1880 census with Lucartha & Thomas Ellis (Parents of her Nora) - I suspect she is the sister in law of Nora, not the sister.  Norah Bell Ellis married a William Huffmeyer. 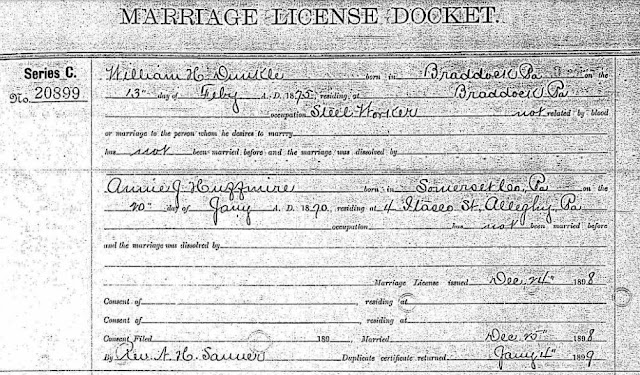 1900 Census
In the 1900 Census we find Harry married to Annie, and listed with a child.
Annie is 30 years old, 5 years older than Harry.
Under Number of Children, there is a 1 under Annie, and no mark under Harry,

leading me to believe that this child, 10 years old in 1900, was not the daughter of Harry

Harry's occupation is clerk in the Opera House, which we know from his obit in 1943, is his correct occupation.

1916 - Listed as a stagehand in City Directory 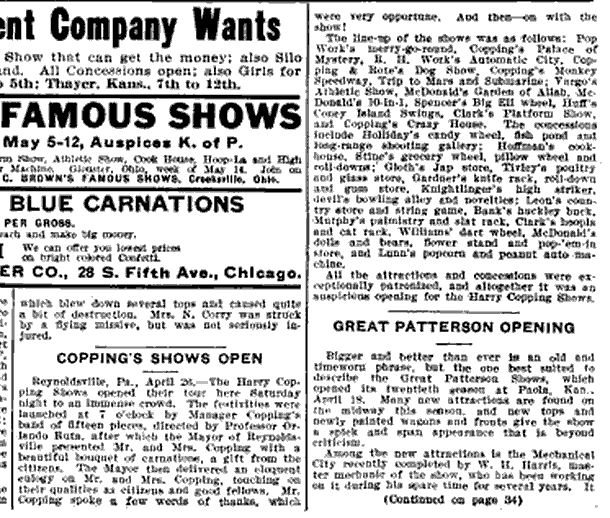 We know he worked for the Harry Copping Shows before working for Cetlin & Wilson - this announcement appeared in the billboard in 1917.  It announces the opening of the Harry Copping shows in Reynoldsville Pa.

also in the same publication, a few pages later -

1928 - Harry's Brother Dies in Accident
In 1928 Harry's brother Walter Warrenton Dunkel fell off a pike and fractured his skull.
(there was probably an article in the papers?)

Walter left a wife Rachel (McClary) Dunkel, two daughters: Thelma & Helen, and a son Sherwood.  In 1943 when Harry died, Thelma & Helen are the nieces listed as attending his funeral in New York. (See notices under 1943 near end of this post). Helen married Wade Clark, and Thelma married Charles Wasmuth. 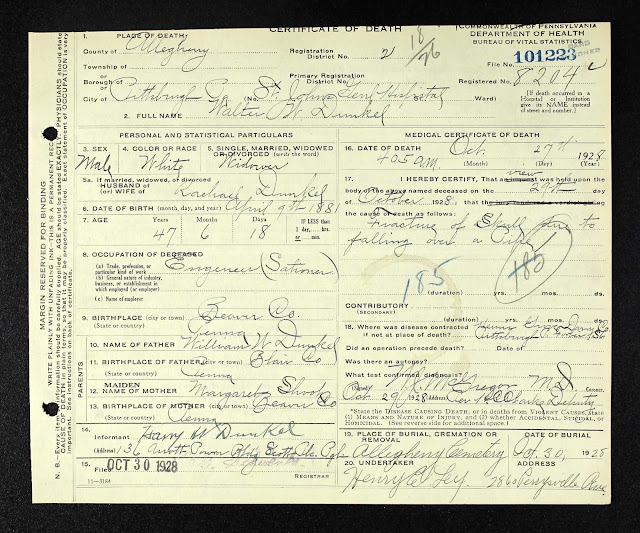 Harry was the informant for the death certificate. 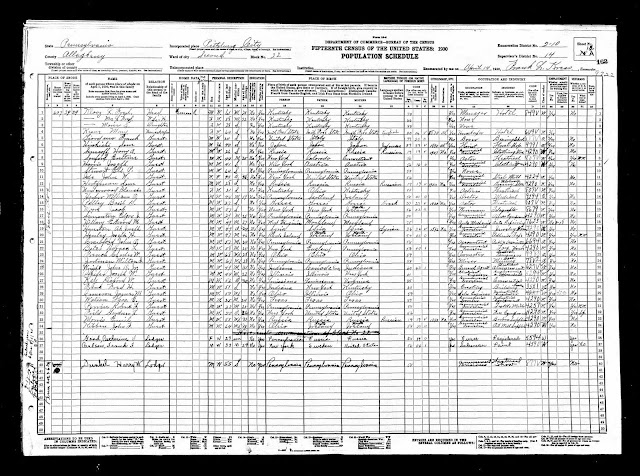 Under the 29 guests appear 3 lodgers, including a nurse, from Russia, A salesman from New York, and Heny William Dunkle, a 58 year old single man with the occupation of "Amusement Business" in the industry of "Theatrical Show." 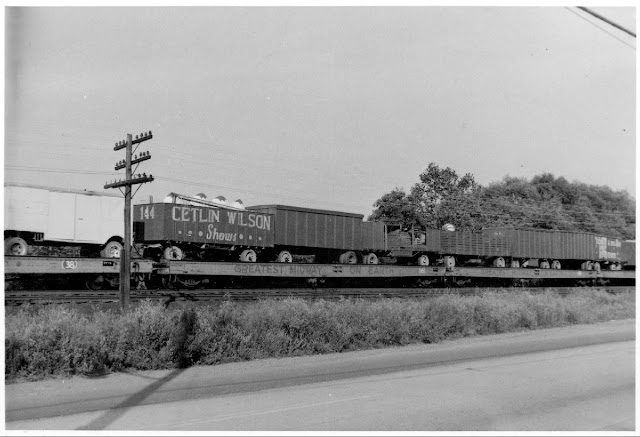 The Cetlin Wilson Show Train in the 1950's

From a circus history message board -
"The best overall reference on Cetlin & Wilson is the book by Bob Goldsack. His contact information can be found in the response to question 601. More detailed information is contained in the carnival coverage in the weekly publication "Billboard." The people often moved between shows, but there's no finding aid for carnival personnel at this time. There's a collection of carnival materials at the International Independent Showmens Foundation in Gibsonton, FL that might contain relevant materials."

"Fred Heatley, Robert Spivey and I have been collectively researching the Cetlin and Wilson Shows all summer long. What started out as a request to write an article for the Carnival Model Builders magazine turned into a major project. I started out borrowing the Bob Goldsack book from my friend Hal Guyon and wanted to write an article about things that might not be in the book. 18 pages of typing later, I believe it's too large for an article. I have spoken to so many people this summer that had an involvement with the show or knew first hand what went on, it has been a real joy to do this. I just returned from a trip to Savannah where they showed for the last time, gathering more information and photos. We hope to have it ready to publish sometime next year. For every answer we get to one of our questions, it seems to open another question. Trust me, there are plenty of unanswered questions also. We are now concentrating on the final year of existence in 1968. We have learned many things never heard of before and none has ever been in print so it should make for a Historically accurate accounting of the shows progress through the years. Just for the record, Issy Cetlin and Jack Wilson started their partnership in 1928. They bought their train in 1945 and closed Nov.3, 1968 still travelling by train although both Mr. Cetlin and Mr. Wilson had passed away by then. " 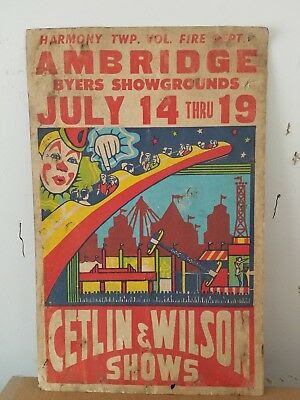 I'm unsure which year this poster is from.

1932 - Began working with Cetlin & William
An article in April of 1943 states that he is beginning his 11th year with them.

"Carnival and circus life was tough. Cetlin & Wilson dumped their entire staff in the 1932-1933 season on the sidewalk in the deep south. "  https://www.cmich.edu/library/clarke/ResearchResources/Michigan_Material_Statewide/Circuses_and_Carnivals/Pages/Carnival-Performers.aspx 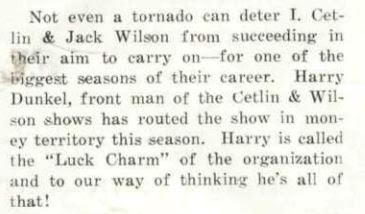 1943 - Sargent Of Arms American Carnival Association
I'm not sure of the dates, but in June of 1943 the editor of the Billboard mentions that the postion is open following the death of Harry Dunkel 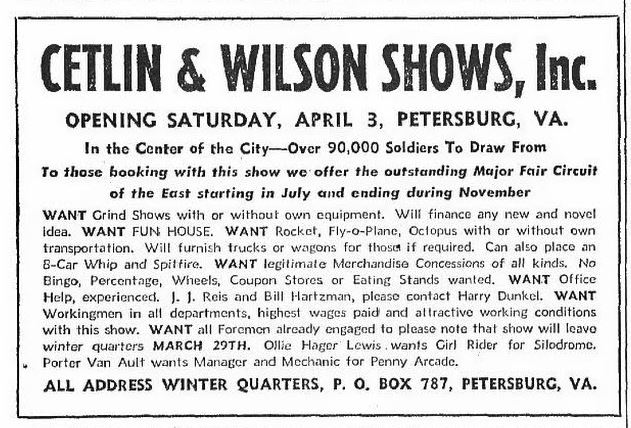 Ad in the March 1943 edition of The Billboard 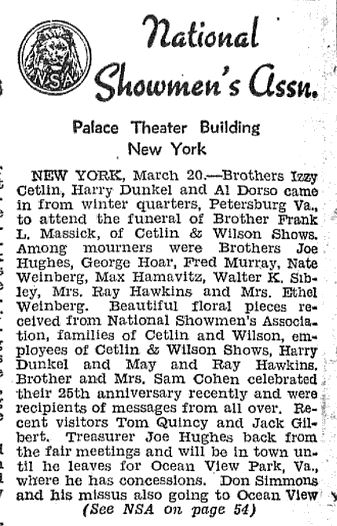 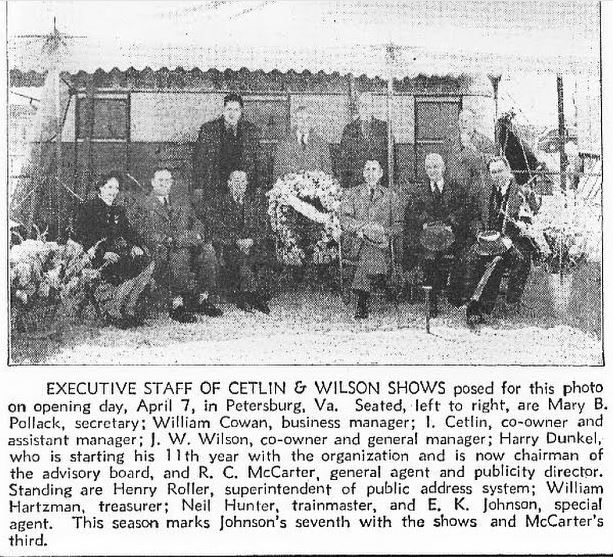 The article beside this photo states that they were In Petersburg Va on April 10th 1943.
Moving to Baltimore Maryland next. 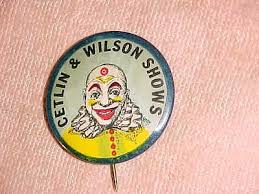 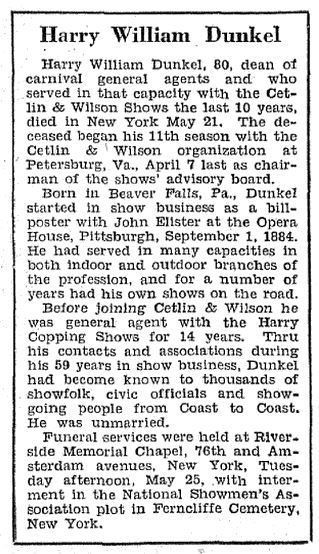 The June 5th 1943 edition of The Billboard mentioned Harry's nieces attending his funeral. 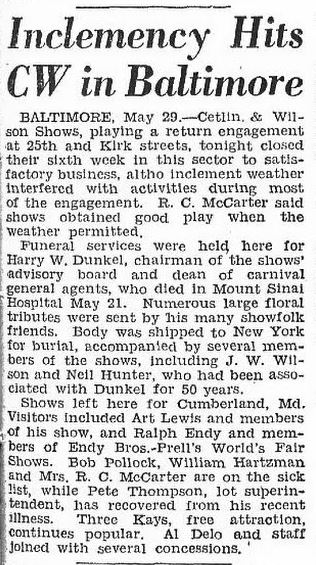 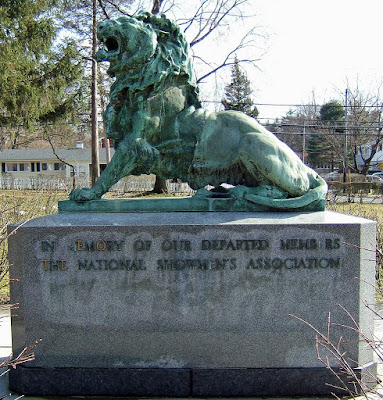 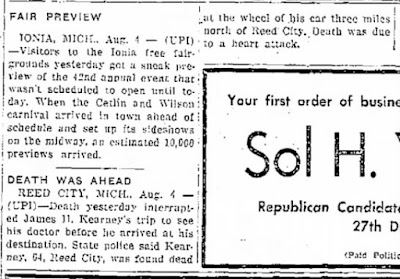 Cetlin & Wilson circus was in Michigan  - in 1958. Long after Harry's death.  But it's possible this was a regular route for them...
Traverse City Record-Eagle
(Traverse City, Michigan) 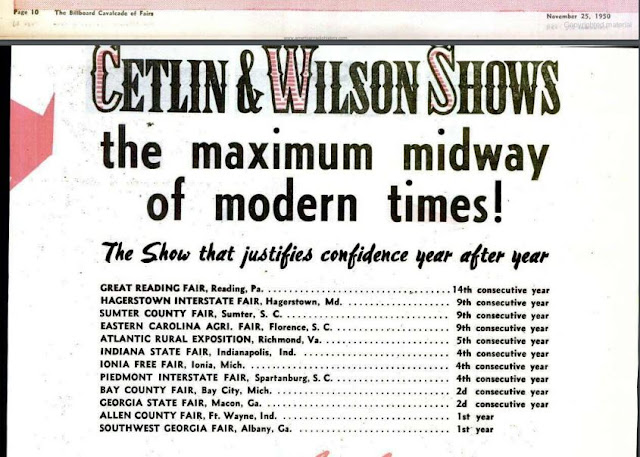 Posted by Heather Truckenmiller at 6:29 PM No comments:


I received this message recently:
"Hello –
I am the source for Robert Strayhorn being born in 1731, being the son of John Straehorn and Jean Niven, wife of Margaret Ross, and children Bethia, Janet, Jean, and Agnes. Such an individual existed, but I now know he is not Robert Strayhorn, the father of Nathaniel, Samuel, and Margaret. Please delete these erroneous connections from your tree. Sorry, Gary Zentmyer.
http://www.zentmeyergenealogy.com/getperson.php?personID=I86048&amp;tree=ZentMain "

I always appreciate corrections!  I'm adding this note here quickly and will come back and review this post and move it to the "Not Heathers Genealogy Notes" soon. 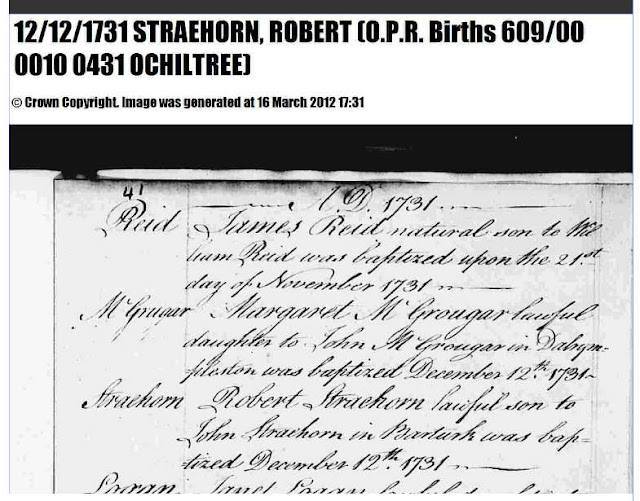 "According to the Biographical History of Chester and Delaware Counties by Cope and Ashmeade (the copy I have seen was entitled Historic Homes and Institutions and Genealogical and Personal Memoirs of Chester and Delaware Counties -Ed.) published in 1901, Vol 2, page 394, "Robert Strahorn was a Scottish dissenter, who left his native land in order to escape religious persecution, and landed in America in April 1775, about the time of the outbreak of the Revolutionary War. He enlisted three times in the Continental army, serving through the entire war, and never receiving a wound. He participated in some of the most memorable events which marked the struggle for independence, and was a sharer in many of the greatest of the hardships which fell to the lot of the devoted patriot army. He accompanied Washington when the latter, on that never-to-be-forgotten Christmas night, crossed the Delaware in order to surprise the Hessians at Trenton, and he shared all the sufferings of the winter at Valley Forge. Robert brought his two sons, Nathaniel and Samuel with him to America in 1775." -Ancestry.com UK

http://www.worldcat.org/title/ninety-years-of-boyhood/oclc/38951564
This is an unpublished book, and appears to only be on microfilm. 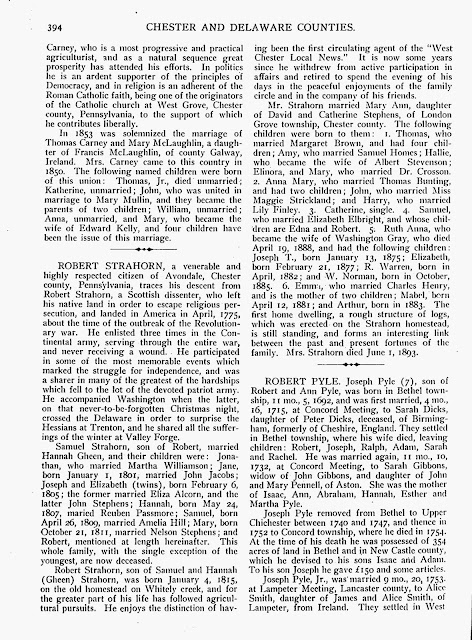 Historic homes and institutions and genealogical and personal memoirs of Chester and Delaware Counties, Pennsylvania"Biographical History of Chester and Delaware Counties" by Cope and Ashmeade published in 1901, Vol 2, page 394, " Robert Strahorn a Scottish dissenter, who left his native land in order to escape religious persecution, and landed in Americal in April 1775, about the time of the outbreak of the Revolutionary War. He enlisted three times in the Continental army, serving through the entire war, and never receiving a wound. He participated in some of the most memorable events which marked the struggle for independence, and was a sharer in many of the greatest of the hardships which fell to the lot of the devoted patriot army. He accompanied Washington when the latter, on that never-to-be-forgotten Christmas night, crossed the Delaware in order to surprise the Hessians at Treton, and he shared all the sufferings of the winter at Valley Forge."

According to the above record, he crossed the Delware with Washington on Christmas Eve

"It is believed that Samuel Strayhorn and his father Robert Strayhorn are buried here. Samuel's sons Robert and Samuel and their wives are buried across the street in the New Section of the cemetery. This older section of the cemetery has no comprehensive listing of persons interred here, and many headstones have disappeared or been buried. Robert was living nearby with his son Samuel at the time of his death, and Samuel in turn was living with his son Robert in the years prior to his death." http://www.zentmeyergenealogy.com/getperson.php?personID=I86048&amp;tree=ZentMain

From The Zentmeyer Genealogy -
"Robert Strayhorn, a Scottish emigrant from Ayrshire, who according to two published sources arrived in the United States in 1775 from Scotland, along with sons Samuel and Nathaniel.  Anecdotal sources claim Nathaniel and Samuel were born in Ireland.  We have not yet located the record of their arrival in America, nor the sons' births.  We have twice visited Edinburgh and also Ayrshire, Scotland and Belfast, Ireland, and the results of our research have been in a word, inconclusive.  There is a Robert Straehorn in the church records who was born in Ayrshire, for whom we found no death record in Scotland.   Robert was identified as a 'mason' in Ayrshire, and as a 'weaver' upon his arrival in Philadelphia.   Ayrshire and Ulster are only thirteen miles apart and there has been a history of seasonal labor migration going back many hundreds of years, albeit primarily Irish workers going to Scotland to harvest crops.  But Irish linen weaving was labor-intensive, as it was an industry which was late to mechanize, so skilled weavers were in high demand.  And we do know that there was a recession in the Irish linen industry in the mid 1770s, because of competition from inexpensive cotton from the British colonies in America, which could have prompted Robert to emigrate in 1775.  So far, we have found only a single piece of evidence in Ireland for Robert's presence there, a newspaper article from Antrim in the year 1761.  Robert's wife Margaret died alone of 'Asthma' in Ayr in 1784, and while she may have been unfit to travel, we could not fathom Robert abandoning her, until we came across This Article." http://www.zentmeyergenealogy.com/other-surnames.html


Listed in the AGBI

Posted by Heather Truckenmiller at 1:44 PM No comments:

To see updates on this page 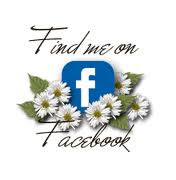 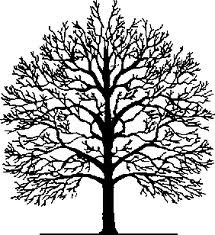